Alright, as this painful seasons continues I cannot go any longer without giving a breakdown of the female fans. I’ve had enough of your generic tweets and conveniently timely statuses to believe that all of you are true fans. So here ya go.. my views on girls who are Los Angeles Laker fans. 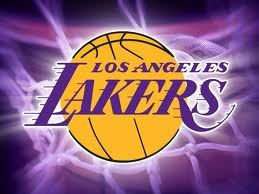 I mean, at least these girls are honest. They don’t pretend to know who the players are or clog our news feed with fake statuses pretending they care. Its okay! You’re allowed to live in Los Angeles and not scream at someone just because you see them wearing a Celtics jersey, or cancel your plans just because Pau choked and now they’re out of the playoffs. Oh, Kobe tore his Achilles? Yeah well so did Troy and we all know what happened to him. You don’t have to love basketball, it’s okay, you’re not going to get stoned in the streets.. (well you probably are but not the kind I’m referring to). You can still use it as an excuse to go to the bar for happy hour when there’s a 5:30 game on because the truth it we would all prefer this category, to the next one of broads who really grind my gears.

The fact that you think we don’t notice how generic and uneducated your status are, just makes me want to punch you in the face. Lets get one thing straight, YOU WILL NOT GET A BOYFRIEND BY TWEETING ABOUT THE LAKERS AND HAPPY YOU ARE THAT WE GOT DWIGHT HOWARD. Girls, “fake it till ya make it” does not apply to basketball. If you start name-dropping and pretending you know what the hell you are talking about, you’re going to find yourself in a deep hole of purple and gold sand and with chance of digging yourself out. Its chill, you don’t have to participate in every conversation that your guy friends are having about the Lakers. You’re embarrassing mistakes will only annoy them and you’re also embarrassing the girls who do actually have some knowledge. Most of you are the same broads hopping on the top team bandwagon and pretending to make a bracket for the playoffs. Give me a break, these guydlines are here to help you! I’d like to go to a bar and watch the game but somehow when these girls show up I find myself paying more attention to them than to the game itself. These are the girls who think we don’t notice them talking shit on the Laker Girls (jealous much..?) and text their friends about how maybe “those green and white uniforms aren’t so bad.. what’s their team name again?” So please kindly cease and desist.

Girls who are genuine fans and rep their city 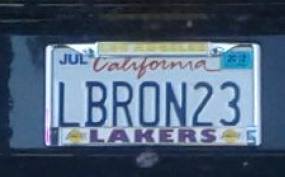 I love the Lakers. I care about the stats, I watch the games, I’d be more than delighted if you took me on a date to a game and I know enough about the NBA to decipher what teams I do and do not like; but the reality is I don’t know everything about every goddamn player. Yeah sure I knew Lamar was going to be a Clipper before I saw it on Keeping up with the Kardashians but that’s because I don’t live under a rock made out of Ryan Seacrest’s hair gel. I wouldn’t let a pre-season game loss ruin my night, but I will probably tweet about it. For these girls, it’s painful to watch the Lakers lose but we love LA and we love the Lakers, and there’s nothing wrong not pretending to know things beyond your social knowledge. Being proud of where you live or where you’re from is important. When you happen to be from a city with a tremendously successful and infamous basketball team, you have the right to rep your city, rep your team, and throw it in other people’s faces even if.. (here in lies the difference between fakers and reppin your city) you don’t watch sports center after the game and debate with your betches what’s going to happen to Dwight Howard now that he’s a free agent. Reppin your city applies to all sports, “Yeah we won the Stanley Cup!! GO KINGSSS!!” ..pfft I bet you didn’t even know there was hockey team in LA until they won, you’re all like “when did we steal Sacramento’s basketball team?” – its okay. Just don’t make an idiot out of yourself and you have my permission to rep LA All Day, just know that it probably wont get you a boyfriend.

Girls who are die-hard fans

These girls love the Lakers and they are not messing around, its that simple. These girls are the ones you don’t want to get into an argument with just because you think she’s a dodo-bird chick, cause she’ll probablyyyy prove you wrong. Maybe she’s a jock and just loves sports. Maybe you’ll see her on TNT one day interviewing a sweattttyyy Kobe Bryant, getting closer to him than you ever will. Cant hate, cause we all know that jealousy is the ugliest trait. The other way that these girls come to be, is that they’re usually wealthy, have a daddy that loves the Lakers and therefore they have season tickets. And you can’t disregard a girl with season Laker tickets, especially when she knows her shit. She get’s to have major celeb sightings, and probably tons of hits on her instagram. 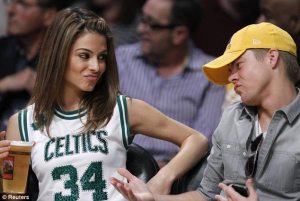 Maria is a real Celtics fan, or is she?

These girls hate the Celtics, but they also probably know enough about basketball to hate LeBron more than the entire Celtic team. My favorite part about the die-hard fans, is that they give the fakers like sooo much false hope; because these girls usually do get a boy friend who is (hopefully) not just using them for their season tickets. Are you a diehard Laker fan but not the wealthiest one in the bunch..? just be her bestie, shower her in compliments, offer to drive and prove your worthiness and hopefully you’ll get an invite to the next game!

Clipper fans are some die hard people, sort of like Boston Red Sox fans. The thing about the Clippers is that they are unfortunately suppperrrr underrated. They share a court with the biggest team in the NBA, their celeb attendees are far and few between those who attend Laker games, BUT I gotta give it to them.. they’re pretty damn good right now and play a good game that is fun to watch. Granted, they don’t get the lights turned off for their audience the way the Lakers do but those Clipper fans want to been seen. They loooovvveeee Lob City and hey, they’re the ones that ended up with CP3.

So wherever you land in this category of crazy bitches, just stick with it, don’t be annoying and force me to defriend you or tweet about you, because I will. a lot. #StayPurp&Yellow

One hit wonder of the week: Reese Witherspoon
Guydlines for Coachella… How avoid Looking Like a Stupid White Boy