Since I did win in the Sex, Dating and Relationships category yesterday I thought I would share with you a funny ditty. Here goes….

You know how bad and non-existent dating is in the city of angels because I have told you over and over again. So, why not import someone? I did just that with my last tour mate. He hailed from the desert and we had known each other for quite sometime so I thought that this could be a real keeper until our last rendez vous ended in disaster somewhere between the Boulevard of Broken Dreams and the Grand Canyon.

I could not understand why he didn’t want to spend more time with me and then I remembered the one time he did visit Los Angeles that Teddy Brewski behaved a little strangely. And by strange –I mean he jumped on (lets call him Magic Mike) Magic Mike and left a steaming, hot present right on top of him while he was sleeping in my bed. It was on the comforter but none-the-less right on top of poor Ralph. Not the best first doggie impression – probably not. But, you know they say that dogs know best so maybe I should have pulled the plug on this “steamy” relationship right then and there.

Why didn’t I listen (er…smell Teddy Brewski’s advice then)? To add insult to injury, the last time Magic Mike and I hung out a bunch of us got a little more than tipsy and a few of people ended up staying in a hotel room. Sleepover! It was all fun and games until Magic Mike nudged me and I heard him yell, “What the hell are you doing?” which is when I noticed my friend (lets call her Ginger) Ginger “accidently” in the process of relieving herself in the middle of our hotel room. That was bad but what made it worse is that her aim was right on all of Magic Mike’s clothes. So, I did what any good “dater” would do and took his clothes to rinse the golden shower in the shower of course. The only problem was Magic Mike had no other clothes to wear home and we had to sneak him out of the hotel room in a white hotel towel, dress socks and dress shoes. I am sure no one noticed or that is at least what we told him. Trust me – they noticed. One of the last times I saw him he was running into his garage in a white terry cloth wrapped around his waist, with black dress socks, and Armani shoes. I guess he didn’t enjoy getting shit and pissed on by my friends and Teddy Brewski. But I would still totally date me! It wasn’t me – I have full control of all of my bodily functions. I swear. 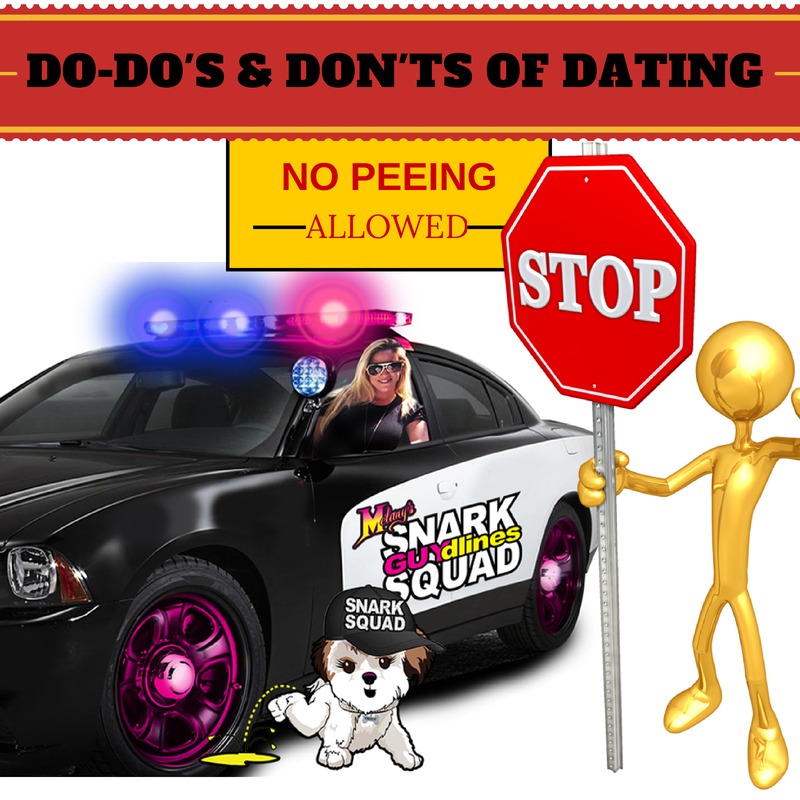 Do-Do’s & Don’ts of Dating: Don’t Pee On My Parade

In the end, I guess he got me back because we gave it one last shot (but not that way) and I decided to go visit him. He picked me up from the airport, loaded my overly packed new, red, suitcase in the back of his car. He closed the hatch and we took off on our merry little way. It was just us minus my shitting and pissing friends or dog. What could go wrong? You ask? Well, we were not 500 yards away from where he picked me up from baggage claim when we saw a police man motioning for us to pull over and blowing his whistle like a rave kid up for days. Ah shit! What now? Oh nothing but my suitcase was lying in the middle of the 4-lane street at the airport. He “forgot” to close the hatch. I am sure he was just doing his best nonchalant check of my belongings to make sure I had no animals or friends in my suitcase that planned on relieving themselves on him during my trip. If I did, they would not have survived the crash. Trust me. What did I do? Well, what could I do? I just told him that he better pray it was not my laptop because if it was how would I be able to write this story for the blog? Obviously, it wasn’t and the only casualty was a brush and a few hair products in which he never heard the end of their demise.

This was the final show and end of our tour. It was a successful run, don’t you think? So, currently I am available for tour dates if you know any solo artists that need an opener.

Melanysguydlines #68 – Don’t let your friends or dog relieve themselves on your date if you want another date.

**Thanks to Magic Mike and Ginger for their approval of this message for international distribution.