Here is the second installment for “guydlines” to the AllFacebook and AllTwitter Social Media Conference in San Francisco (first part here).….come on, if you are going to attend a social media conference and drop the dough (or have your boss drop the cash)  at least make it worth your while or pretend to be interested or just ACT like your interested. 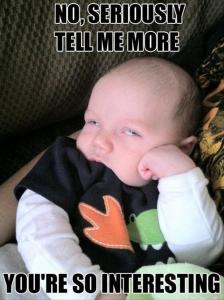 I mean you had to get dressed and go to the conference – don’t make it a wasted good makeup or great hair day.  Do something people – look alive.

Tweeting incessantly during a lecture about Twitter is probably not going to help anyone, including you since you are just regurgitating what the person (parrot) is saying at the front of the room. I can guarantee that your twitter followers don’t give a shit what was going on in that lecture especially if you don’t give a shit about what was going on in that lecture.
I must have missed the memo to bring my office to the lectures as I just had my iPad. I felt like I was in the uncool (not snarky) group of people who were not multitasking enough and responding to every single email, tweet, Facebook message and God knows what new social media app popular for that minute and a half.  Do you remember the retention test when you took the SAT’s? Well, I would have loved to give the people in that room a pop quiz about what the speakers were talking about and submit to their employers. I am sure that everyone would have failed. Not only would they have failed, but they would have failed miserably. 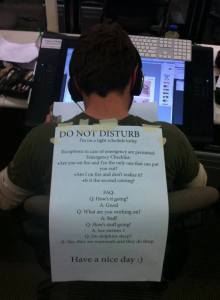 Another thing that is so weird to me at conferences is when people are unfriendly – or just down right nasty. Yes, this is directed at you lady with the facial expression on her face that would haunt a house and keep lions away from approaching. Try cracking a smile or looking like you are somewhat approachable. I realize that we were there for a social media conference but if you are social online it does not mean that you need to be antisocial in person. Lets all try it! K? It’s easy! Really. Btw  -Special shout out to those women who give limp handshakes. Don’t do that EVER. Practice with someone before your next conference or meeting or day….

On the flip side of antisocial is the over friendly conference goer. There was one there and she found me and my new friend (fellow blogger you should check her out Ms. Cheevious) and wanted to know everything we were talking about and would have taken our diaries to read if she had the chance. Creepy stalker lady – tone it down, would you? You are scaring all the eligible bachelors. Shit. You know that it is why single women go to conferences anyway, right?

Social Media is in fact an addiction and I am addicted but not as addicted as some of these people at the conference. I need to party with them. I thought I was pretty up to date with my computer nerdi-ness but these people take it to a whole new level. I mean seriously! There was a guy who thought business casual meant wearing pajama pants to the lectures (dude you are not in your home office and there are PEOPLE here). I remember going to a function where Billy Idol was the speaker. People could not shift their gaze away from him for a moment. Now, in the social media world, if you are not tweeting at the exact right time during the lecture (but not over tweeting) then you are not qualified enough to have the mic to ask a question to the king nerds on the panel. There is a lot to learn – I think. 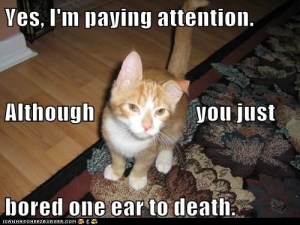 Melanys Guydline #48 -There is no trick to the social media world. Throw some glitter on that shit and make it sparkly. That is what I learned from the conference.

Last installment for the speakers is coming up next….some “guydlines” you should not miss.

8 Responses to AllTwitter, AllFacebook, ALL Nerds Part 2 – Billy Idol should host the next one