It is that time of the week where I am compelled to sit down and write something funny but not too offensive because I would not want to alienate my people (trust me, some of the people I know I can DEFINITELY live without). My brain is tired from catching up last week. I did not go out or do anything exciting but still feel like a truck hit me. It could be the “annoyingness” of some of my “so called” friends that flit in and out of my life or the extreme magnetic force running through my body that attracts the weirdest polar (and bi-polar) people.

For example, I went out to breakfast with Teddy Brewski and just as I began to eat my yogurt parfait, I was approached by a nice looking young man. He was tall, dark, and handsome (still not quite sure where this description became the standard for good looking men and how it can refer to Caucasian men?). What more could you ask for?  A LOT! We began to chat and he told me about how much he loved my dog and how cute Teddy Brewski is and I agreed. He continued to tell me that he had two apartments by the beach and that he loved his cats. I love the beach, prefer dogs (but cats are cute) and wondered if he used one of the places for his office and the other to shower and sleep. This could be promising! But, no! Of course, I found the one guy that actually rents an apartment for his 21 cats. GROSS! I am sure that is one too many cats for even the cat lady. It probably smelled fantastic in there. Is that where he brings his dates after a romantic dinner? I can just smell the foul aroma wafting through his apartment and am sure that it leaves a pleasant taste in the back of all of his date’s throats. To top it off, he asked if I was on Facebook and I said “NO but my dog is” and excused myself. Remember when guys used to ask girls for their phone numbers? Now, they ask for your Facebook to stalk your page and dissect your likes before actually committing to a date with you. It is like you are giving the person the ability to do a background check by accepting their friend request. In this case, the cat-man and I are NOT friends. So, in my professional opinion, I think I dodged a bullet there. 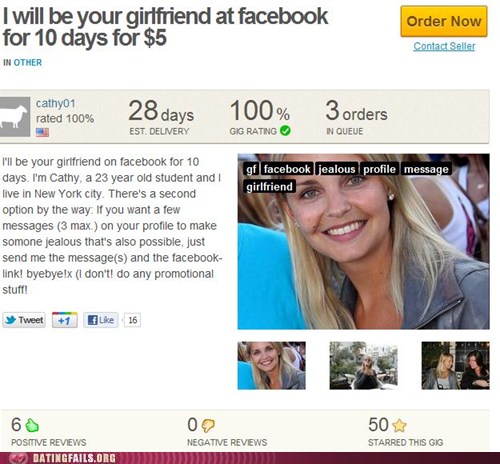 Communication has changed so much with the advent of the internet and text messaging. I can’t tell you how many times I am online and a guy has:

1. Asked for my number and never called. This is really weird. Does he collect numbers in a jar?

2. Asked for my number and sent a text message instead of actually calling, which must mean that he has a terrible voice or speech impediment.

3. Asked for my Facebook (you know how I feel about that).

4. Not asked for my number but wasted my time emailing about the dumbest topics. I find it strange how much time guys have to waste emailing and texting without ever wanting to see or hear me to find out if I am living and breathing. Why is this?

Unfortunately, this is the new age world we live in where people lack any type of interpersonal skills. There was one dummy who had attempted to reach me online for months. He finally gave me HIS number (BIG SIGN MELANY BERGER) and I stupidly called him. We spoke for almost an hour and he told me about how he had been shot and stabbed and I asked if he was in a gang (logical question, right). He laughed and explained he worked for the government. That sounded cool. But, he went on to tell me about his job, landlord, favorite food, color, and every detail of his life while I listened patiently on the other end. I just chalked the mumbling to nerves. You know? It is awkward the first chat. He continued to tell me about his favorite type of low fat/low sodium Swiss cheese with exactly 8 holes (not 10) in every slice when he abruptly told me that he would have to call me back. He is probably searching for his perfect “holely” cheese because I never heard from him again. Did I say something wrong? I know I did not (because I could not get a word in edge wise). I am sure he will call when he finds the right amount of holes but I will be talking to a guy who likes American or Provolone. A sure warning sign should have been the fact that he never asked me for MY number.

Then, there was the creatively named “50shadesofgr8t” profile online. I decided to respond to his email because he actually took the time to write an email (not flirt/wink/send smoke signals or whatever lame automatic, non creative way dating sites offer for people to weasel out in an attempt to contact a potential date). The email he wrote was not very creative but full of standard compliments a person uses to copy and paste on every somewhat good-looking girls profile. Well, I did not read his profile claiming that he is constantly compared to the guy in the “50 Shades of Grey” trilogy (I have not read it and from what I have heard, I am not THAT desperate). He also wrote a few paragraphs on how well endowed he was and that no woman would be disappointed. Well, I read all of this after giving him my number. Big mistake. No surprise that he was a texter first. DELETE! 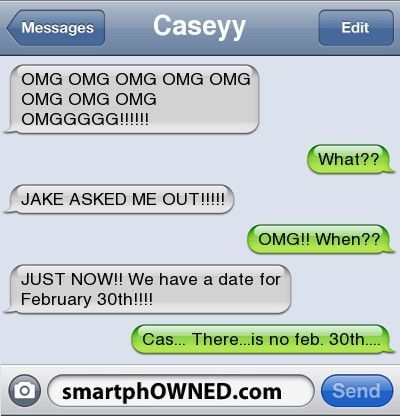 This poor communication is not just limited to my dating life. Unfortunately, it exists in my day-to-day life with work and friends. I just find it so weird where you meet people and how they come in and out of your life. I always wonder if people have friends that they solely communicate with via text and facebook? Aren’t these people called “pen pals” and when did this become the standard for communication? It used to be fun to talk to my friends on the phone and laugh without writing “LOL” or a smiley face. The only people I talk to on the phone are my parents, people to make appointments, reservations, complaints, and oldest friends whose phone numbers I used to know by heart. Now, we all have different numbers and I just let my I-phone take care of storing that information. God forbid we had to use our brain for information like this. Thankfully, I still memorized my parents phone number (before the advent of the address book on the iphone) and would have a lifeline if I were ever to need to make one phone call. When did we become so lazy that it was just easier to text or send a Facebook message? I am sometimes at fault, but always make sure to pick up a phone and call so that the friend on the other line can actually hear my voice and make sure that I have not taken up sucking helium as a hobby.

Hopefully, the few personal interactions we still have can be preserved. I know we can “like” presidential candidates online and support them through social media, but I hope that we are never allowed to text our vote for president. Some things are sacred, right? I also pray that we can never get married via text. Just because you can text it and facebook it, does not mean its right.

Melany’s Guydline #23 –If we can start having babies via facebook and text, I am moving to Mars.

Trick or Turn Tricks?
I am most thankful for…..

17 Responses to Will you go out with me (text or Facebook)?