When I was younger, I used to play games all the time and always had boyfriends or involved in a dating relationship. I had funny relationship advice and relationships stories of some kind because I was always in a relationship! Now, I seem to have bad dating stories or online dating horror stories.

Being young and finding potential dates was much easier than it is today. If I wasn’t competing in sports outside hitting or kicking balls, you could find me inside dribbling or volleying other types of balls. All the best looking guys played sports too. I do have to admit that when I learned how to use a computer and got Nintendo that I loved playing those games and it would be a fun way to unwind with all my “boyfriends” on the floor of my childhood bedroom eating spagettios! If dating were still so innocent and easy, I would be set and never be a relationship blogger (though I think you would miss my dating horror stories) or blog another day in my life.

Now, I don’t have time to play any games online – I would love to! But, whoever said working for your self is easy has never done it before. I barely see my bed but it looks great!

With that said – I don’t play any games like Words With Friends or Candy Crush but I know my friends are addicted. My friends are also married, involved, and or have children. Now, I may finally know what they know and never shared with me before. People who play these games are doing more than just spelling words.
These are the people with funny dating tips and dating stories.

There was a survey conducted by Zynga that revealed players flirt and have love connections on these sites. Nobody told me this until now! Why were my friends holding out on me? Help a sista out!!! Thankfully, I am privy to information such as this study and know what I should be doing tonight in order to meet a potential mate.

But, what happened to going out for drinks or playing mini – golf? No – people want to sit behind their computers and play competitive games while flirting. At least if I played Words With Friends I would be certain that I would not date anymore men starting conversations with the word “yo” and that is a very promising option.

After weeding out the really weird requests this week from a variety of publicists I found this interesting and maybe the reason why I am still single. Maybe I am barking up the wrong tree with these conventional dating sites? 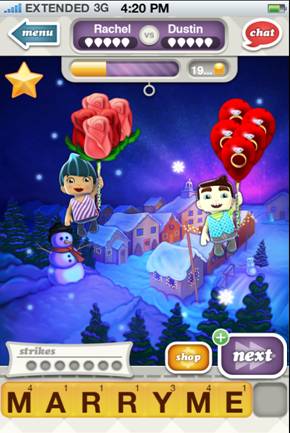 “Zynga recently conducted this love connection poll, which revealed how players connect, flirt and initiate love in their favorite With Friends games. Conducted through an un-scientific, in-game poll across a variety of Zynga’s With Friends titles, respondents confessed to using the chat function to flirt with their opponent and being more competitive when playing against someone they have feelings for.  More than six thousand With Friends players participated in the survey, dishing out some revealing results. In the survey players shared their various flirting techniques and according to the poll, texting and speed dating are no longer the only option when it comes to breaking the ice with a potential partner. Today, one out of ten players surveyed said they have requested to play a game with someone they were attracted to in order to spark a conversation.

Rolling Stone: Selling or Selling Out?
How to Party Like a Surfer: Don’t Yell & Leave Your Shoes At Home