Ah Las Vegas! I have spent many days and nights in my favorite city doing all types of unimaginable things. One of my most memorable “vacays” in sin city was not a vacation at all. When I worked in the illustrious music business, marketing rock bands, I was presented with an offer “to work” a show that I could not refuse. I am talking about Van Halen people. You know who they are, right? Well, one of the first tours I ever had the privilege of working on was Van Halen (not with Diamond Dave but with the Red Rocker himself – Sammy Hagar). Like most VH fans, I love David Lee Roth and still believe that he is one of the most enigmatic front men of all time and could work spandex pants in his hayday like no other rocker. But, in this story, it would not be the same without Sammy. Neither singer is a “one hit-wonder” -that is for sure! 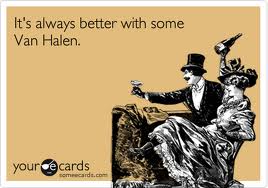 My boss (lets call her the “Pill” even though I found out she did more with the powder from donuts than just eat it if you know what I mean) asked me if I would like to go to Las Vegas and work the VIP party. Of course! I am the VIP party hostess for rockers around the world, and have heard more than my fair share of Van Halen party stories. She told me I would get paid too! Hell ya. I packed my things and jumped on the plane headed to sin city. Literally, as soon as my feet hit the tarmac I was running around backstage at Mandalay Bay Events center like a chicken with my head cut off. At least, I did not wear wedges. 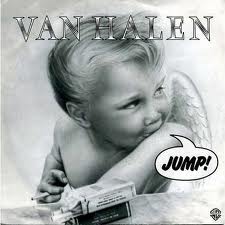 When they say Jump you say….

Equipped with my walkie and feeling very official I did everything I was told (but had a very hard time understanding the mumbling Eddie Van Halen when he asked me to get him water). Have you ever heard him “speak” with his mouth and not his guitar? I know why now. At that time, he was missing his two front teeth so it was that much harder to make out “ca has som watr?” but I did and he did not go thirsty. But, I know when Van Halen says, “JUMP” you say “might as well” right!?

The introduction to tour life was a little overwhelming at first. People working the tour eat in catering (but the new crew sits at the kids table) and the rockers in a different room with real utensils. As I shoved my plastic fork in my mouth and tried to digest the magnitude of the weekend that was about to occur I did not care that I was in fact a slave for the weekend and had no opinion or free will to decide what I could and could not do. I think the funniest part of this entire experience is the fact that (my now favorite band) Shinedown opened up for VH and I thought the guys were dorks. The openers eat with the slave crew too btw. I guarantee you don’t find Shinedown at the kid’s table anymore drinking out of plastic cups! Good on you boys! YOU ROCK!

I digress. So, fast forward to the reason I was really there and that was to facilitate a successful VIP experience for people forking over $1000 for their Van Halen show. I was the leader of the pack and led the herd of all 200 diehard VH fans into the room for their preshow party. Problem was my boss was so cheap that she did not order enough food or drink for this type of partying crew. After watching the people inhale the small selection of finger food and look at me like I was the next course, I did what any good VIP host does –deflect. In my loudest crowd herding voice, decided to tell some jokes and lead the hungry, over paid, patrons to the next part of their VIP experience, which was a tour backstage and preshow sound check. As soon as we made our way winding around the backstage tour where you saw nothing (except stacks of speakers and a lot of wires which caused a hazard for the wasted patrons hoping to get a peak at the Van Halen brothers which of course never happened). Who ever thought up leading drunk, crazy rockers behind a stage full of big wires and other machinery before an actual show was an idiot.

So, we completed the tour and went to listen to sound check. The waiting and anticipation for the rabid fans was all worth it when the band took the stage and rocked a few songs for the limited group. It was awesome and the only time I really saw the band play. Working in the music business, you learn that you rarely get to see the show from the venue but from backstage on little monitors. The best part of the show is the last song; because at least when I heard “Right now” I knew it was my chance to take a peak at one of my favorite bands do what they do best.

The show wraps and everyone in the band scurries into separate dressing rooms. As most of you know, Van Halen and the relationships with their lead singers are tumultuous at best so each brother went their separate way and the rest of the band into the Sammy’s dressing room. This meant my time to party. As I walked through the back halls to try and catch a glimpse of what really goes on in those dressing rooms I was stoked that I made friends with the webmaster because he was super close to Michael Anthony (the real bassist of Van Halen – sorry Wolfgang).

You ever hear of Cabo Wabo tequila? Well, Sammy really did own that and it is the best Tequila ever (if that is really what it is). I heard a large man order me into the dressing room and ask if I wanted a real “Waborita” and who am I to argue with him? My imbibing ensued and next thing I know, I am drinking a bright blue drink and on another planet. 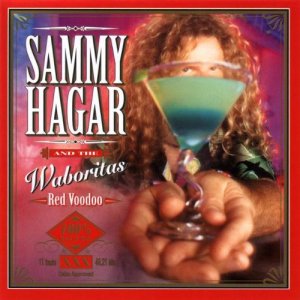 Sammy Hagar’s real Waborita will kick your ass too! Try one!

Still have no idea what is in a real Waborita but I LOVED IT. The rest of the night is a little hazy but I remember eating Mexican food, getting invited to a New Years Eve party at Michael Anothonys and watching a million people in and out of the dressing room. There are flashes of me playing blackjack and then I woke up the next day feeling less than stellar.

I do know however, I must have had a blast because my boss “The Pill” called me in before work on Sunday to tell me that I was not supposed to be partying with the band unless invited! Well, bitch I was invited! She told me that she was never asked to have Waboritas in Sammy’s dressing room and that I should be careful. So, I did what any great employee does – have Waboritas in his dressing room after that show too.

My boss was such a cheap ass that when she paid me she said she was going to give me cash. Mind you, I worked (and partied with the band because that is work when you are invited, right?) for over 20 hours each day. She handed me $120 and told me not to spend it all in one place! Really? I could not even buy a pair of shoes with that.

Melanysguydline #43– Do not party with the band unless you are invited. If you are invited party so hard that you make your boss jealous and have a kick ass story to tell!

BTW – you can have your very own rockstar story in Las Vegas b/c I am giving you the chance to win an amazing weekend trip! Enter here.

ToadHopNetwork is now a sponsor to the Las Vegas contest #guydlines giveaway!
Proud to be chosen as the Why Not Girl of the Week! – yours truly