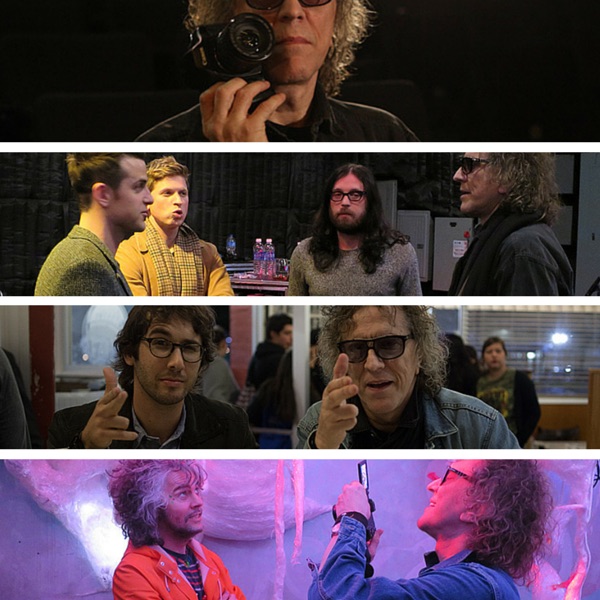 Mick Rock is a British photographer, better known as “Man Who Shot the Seventies” because he has captured music royalty spanning the past few decades in all its glory. He refers to himself as the “One and only son of Mrs. Rock” and I love his snarky commentary as you can see in this clip from the new show on Ovation called On the Record with Mick Rock. The premier is this Sunday, August 2nd at 8PM EST and I will be tuning in for sure and tweeting along with the #MickRock.

I love watching all shows that chronicle music history and this show is going to be awesome! Mick Rock is unapologetic, real and downright entertaining. Rock’s resume reads like a Rock n’ Roll icon ceremony brochure having shot some of my favorite artists from Queen, David Bowie, Lou Reed, Joan Jet, Blondie and the Sex Pistols to name a few. The legends he has photographed read like the who’s who in the business and I would have given anything to be a fly on the wall at some of these shoots. He continues to be one of the most sought after photographers for artists today photographing legends in the making such as Snoop Dog (Lion), Cee Lo Green, Daft Punk, The Black Keys and many others.

Thanks to Ovation we will have the opportunity to be that fly on the wall from some of his past shoots and watch Mick as he visits with Josh Groban, Kings of Leon, The Flaming Lips and the one and only Patti LaBelle. On the Record with Mick Rock follows Mick to check out the sights and sounds of the hometown’s of each of these artists to experience what truly inspires them. It is stripped down, real and I can’t wait.

SAVE THE DATES AND TAKE NOTE:

ON THE RECORD WITH MICK ROCK: Josh Groban – Premieres Sunday, August 2 at 8 pm ET. Native Angeleno and multi-platinum recording artist Josh Groban takes Mick on an inspiring tour of Los Angeles, paying homage to the high school teacher who gave him the confidence to succeed, stopping by the after-school Shakespeare program he personally supports and treating Mick to a moving performance of his song, Hidden Away.

ON THE RECORD WITH MICK ROCK: Kings of Leon – Premieres Sunday, August 9 at 8 pm ET. Mick discovers how the Grammy(R) Award-winning rock stars Kings of Leon escaped their Pentecostal roots to find a home in Nashville’s evolving music scene. The band dishes on its rocky past and gives Mick a tour of country music’s hometown, ending the day in the Kings’ private studio for an exclusive jam session.

ON THE RECORD WITH MICK ROCK: Flaming Lips – Premieres Sunday, August 16 at 8 pm ET. Mick touches down in Oklahoma City to hang with the Flaming Lips and uncovers how these masters of psychedelic rock have become the surprising hometown heroes. Lead singer Wayne Coyne shows off his wacky art gallery, fills Mick in on his all-night parties with Miley Cyrus and ends the day with a performance of the group’s hit song, Do You Realize??

ON THE RECORD WITH MICK ROCK: Patti LaBelle – Premieres Sunday, August 23 at 8 pm ET. GRAMMY(R) Hall of Fame artist Patti LaBelle takes Mick on a personal tour of Philadelphia, visiting the theater that launched her career and stopping by her childhood home where she first found her voice with a broomstick microphone. After grabbing a bite at her favorite soul food spot in the City of Brotherly Love, Patti invites Mick into her living room for an intimate performance of What Can I Do For You?

Is there really any need for me to tell you another reason to tune in? I will be!

So, what are you doing August 2nd? Tuning in to watch Mick Rock with me!

Now, let me ask you a few questions?

As I always say, music is truly the soundtrack to our lives and I remember every song that was playing during the most important times in mine.

So, if you had to make a playlist of your favorite artists that have impacted your life…..which bands would you include?

You think I know a few things about Rock N’ Roll? So, trust me when I tell you that you need to tune into Ovation’s On The Record With Mick Rock on August 2nd for the premiere! ROCK ON!

On The Record With Mick Rock

*Thank you to Ovation TV for sponsoring this post. All opinions are my own.*