Why, Reese? Why? You had everything. You had a well-deserved title as an all-American girl, the healthiest blonde locks in Hollywood and the best Southern twang I’ve heard in a long time. Then you dyed your hair dirt brown, married a no name and got yourself arrested for being a rude, inconsiderate drunkard. I never thought you’d be on my one hit wonder list, but your behavior earns you a top spot on today’s agenda.

I’ll give it to you straight, Reese. I expected better from you. If there’s one thing I can’t stand, it’s celebrities who think they’re above the law. I can see it now. You and what’s-his-name have one too many vodka spritzers at the local Georgia watering hole and convince yourselves you’re fine to drive. That is my greatest pet peeve. If you have all the money in the world, take a cab, losers. Or call your limo service on speed dial and have them pick up your sorry selves. But no, getting arrested is just easier when you’re famous.

This is when you blow it, Reese. You stuck your belligerent head out of the window of your car and said this: “Do you know my name? You’re about to find out who I am.”

Just because you’ve been in a few romantic comedies doesn’t mean that people are going to just let you off without a ticket. Things would certainly be different if you were George Clooney. I’m sure your hair was a rat’s nest, your makeup was smeared and by the looks of your smug, three sheets to the wind mugshot, you were definitely unable to control the amount of saliva exiting your big mouth. I hope that picture haunts you forever, because I certainly had nightmares. 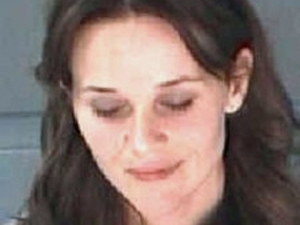 Clearly you could open your eyes for the shot shown around the world?

As someone’s mother, someone’s daughter and someone’s wife, it’s safe to say that no one is going to stand up for your poor choices this weekend. We’ll eventually forgive, but Google images ensure that we’ll never forget. Hopefully, this isn’t a ply for pulling a good girl gone bad like Rihanna, because that will officially send me over the edge. We can all agree that you’re way too old for these antics. After this stupidity, make like Mischa Barton and disappear.

4 Responses to One hit wonder of the week: Reese Witherspoon

Leave a Reply to Wendy Click here to cancel reply.