One day, I was working in my living room and all of a sudden hear a man’s voice saying “hello,” which was so scary considering I live alone. I look around and slowly move down the hall to my kitchen and say “hello” in a very timid, little voice. I hear “hello” again and get really scared. “Who is in my house? Where is this voice coming from?” Then, “Melany, can you hear me?” and I freak out. Then, I begin to tiptoe super slowly down my hallway and cower in the corner with the cordless phone and begin to franticly dial 911. “Melany, I am over here. In your computer.” So, I think I have really lost my mind until I catch a glimpse of my monitor and see a guy on my computer screen waving his hands and asking again if I can hear him. This was my first experience (for a potential dating match) via video online resources and it scared the shit out of me. Apparently, while chatting with a friend’s friend on Facebook (who was VERY cute), he pressed the button to video chat and I accepted (but thought it did not work). My computer had stopped doing anything (or so I thought) because the little pie, colored pinwheel just kept spinning, and spinning (and spinning). So, I assumed my computer was frozen and decided to walk away and go on with my daily activities. But, a little while later, my monitor began talking to me. From this point forward, I was VERY freaked out by any face time or Skyping activities (and do not participate in either, especially when it is for Internet dating purposes).

Regardless of this encounter, I decide that I need to do something drastic in my fairly, non-existent dating life. Last week, I signed up for Internet dating (non-video). I figured that I am not really meeting anyone blogging behind my computer at 6AM while wearing my powder blue, World Wildlife Fund sweat pants (that are 2xl and fall off when I run up the stairs), black Ozzy T-shirt (that is so faded it looks like Ozzy could have worn it himself from the very first Black Sabbath tour) along with my hair stylishly placed in a pony tail on TOP of my head (like Bam, Bam from the Flintstones). I am not meeting anyone at the gym, singles events (that are so boring I want to stick a fork in my eye) hiking, biking or traveling to and fro San Francisco. I know that there are not many places to meet single guys, so I need to bite the bullet, put on my big girl panties, and join the world of Internet dating (last resort).

Last week, I signed up and filled out the most ridiculous questionnaire on the “TresDate.com” site because I am also tired of my mother nudging me and telling me dating stories about how so-and-so met her husband on the site and that I should really try it because I am not going to meet anyone sitting within my four walls and I am not getting younger. This is apparently the ONLY way people like me have the opportunity to meet other people in my tribe (I hope not).

I fill out only 3 of the 10 questions (asking virtually the same questions just over and over again – kind of like my Jewish mother) such as  “What is your perfect first date” which I answer “one that I don’t have to ever go on another first date again” to “What do you do on Friday and Saturday night” and I type “obviously not much since I am filling out this questionnaire on Friday night”. Who wrote these questions? It is not like I really read what these guys have to say and they DON’T read what I have to say. I just want to see their FACE, body shot (girls want to see that too), what they do (does it involve knowing how to spell, which judging by reading a lot of these profiles most of these men chose professions that do not require knowledge of the English language or how to spell in such language), and if they are old enough to get into a bar and not TOO old to be my grandfather (yes, I get A LOT of those-GROSS).  I add a few pictures (very recent- and only a few because I doubt the dater wants to see EVERY picture from elementary, middle, and high school). Lastly, I think of a clever name (just use the 1,999,9999,888 number that is assigned to me because there are so many singles) so that I can be mysterious. The biggest problem with this, is when guys use their number, we start talking, he tells me his name, I forget and I have no way of referencing who is who because of the number appointed to him (btw….guys should use a name because they don’t get contacted as much as girls online unless he has posted an obviously fake model shot of someone who is not them in any way, shape or form -Don’t do that!) Now, I am ready to “Tres Date”!!!

During my first IM conversation on “Tres Date” aka “Desperate,Douchebags,Dorks.com,” it was not even a full minute into the conversation before this guy asks me what I am wearing? I should have described the less than flattering outfit mentioned previously but decide to be “sexy” and tell him what he wanted to hear (which is describing some form of fake lingerie outfit). I ask what he likes to do for fun and he proceeds to tell me that he wants to kiss me all over and I am “hot” about 10 times. Thanks guy. I try to ask a few more questions and then get busy with work so I shoot him my cell number (lets see if he knows how to call and does not just send the oh so brave and manly text message). A few hours later, 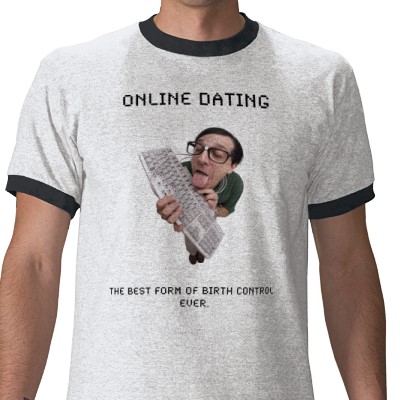 I hear a tweet on my cell and it is none other than my “Tres Date” guy texting to ask what I am doing. I respond that I am on my way home from the gym and the guy texts “what are you wearing?” Seriously douche. What do girls where to workout? I tell him “my LuLu’s and a tank” and ask him, “What he wears when he works out” (not that I really care but wanted to point out the obviously ridiculous, desperate question). He texts back that he “wears a condom when he works out with a girl”. WTF? I text him “wrong kind of girl” and he texts back that “he was kidding” and that “it must have lost context via text”. Sure buddy, that is totally the reason. Have not heard from “What are you wearing” again. Shocker!!!

Maybe I need to try Skype again so that the next guy doesn’t have to ask me what I am wearing and if he still asks for my number after seeing my ridiculous sweat outfit via the little hole on my computer (that is frightening unless pointed in the absolute perfect angle, with the correct lighting, perfect shirt, and flawless makeup) then he may be a front runner for my first “Tres Date”. I said that I signed up, not that I have gone out with anyone yet. Next…..

Melany’s Guydline #12 – When a guy asks what you are wearing on an Internet dating site, tell him nothing but by asking this question he won’t ever see your clothes on his floor. (Be careful that you are not connected to video chat because this response loses some of the desired effect if you are wearing a less than flattering outfit and look like a cow).

6 Responses to Internet Dating – Some Do’s and Dont’s