I am so proud to tell you all that the Melanysguydlines.com family is growing in leaps and bounds. Since I only lasted in my sorority for a week (because I didn’t care what way food needed to be passed around a table and was a horrible follower) it is only fitting that I have a pledge in the MG house. I am going to rush her like she should be rushed and groom her to be the best MG mini me ever! We hope that she can stay a while but are happy to have her for as long as we can. I am talking about our newest intern people. Get ready to meet her. She had me “I want to write for Saturday Night Live” and we take that type of humor seriously in the MG house of snark. Looking forward to her sharing some of her stories – pay attention because maybe we can learn something from her even though she has no idea what a pager was used for and has probably never seen a pay phone. Introducing the youngest MG member, Libby D. 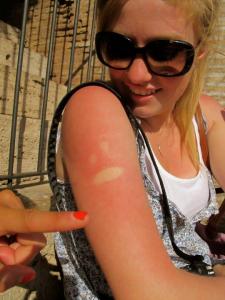 She is an intern – I have no idea? Kids these days.

Libby’s Bio (from her mouth):

Libby thinks of herself as a modern Jackie O mixed with a gentile Sarah Silverman.  Her college friends call her Schlibby, and if you’re lucky maybe she’ll tell you why.  She is a natural blonde from a state that 27% of Americans can place on a map*.  She moved to LA 3 years ago because she hates when the temperature gets below 50 and to attend Loyola Marymount University.  Her major was Civil War reenactment (History) and sitting in Starbucks (Screenwriting).   LA felt weird at first, life on the East Coast had not prepared her for hipsters.  Luckily, Miley Cyrus had written a song about “hopping off a plane at LAX” that really helped her adjust to the Golden Coast.  So she joined a sorority, got a few internships and had a really, really, really good time.

You can often find her in jorts (jean shorts) sporting some J. Crew on top, cruising the streets of LA.   She loves America, which was only a problem when she attempted to sing the National Anthem at a karaoke bar in Rome.  In 2008, she was fortunate enough to travel to Kenya, where she worked with HIV+ children as well as women using microcredits to support their families.  In the summer of 2012, she spent two weeks mimicking the lifestyle of the Little Mermaid studying marine biology in Roatan, Honduras.   Now she’s settled down near the beach where she writes about her personal experiences like dating, current events or that one time her boss’s dog farted during a business meeting. In her spare time, she enjoys reading Fitzgerald, looking at cat memes and watching old Destiny’s Child music videos on YouTube.

You can follower her at:

*This is not a real statistic