Fa la la la la….la..la..la..la! The inundation of Christmas music from every open orifice in the Los Angeles area makes me think of my beginnings in the music business, though it did not always include the jolliest of feelings. When people ask me what I want to do (when I grow up) I still tell them something involving music. No, I do not want to sing the Driedel song or tell you that imaginary Santa is kissing mom under the Christmas tree (cheating? no wonder there are so many confused men in this world because we give them the wrong message from a young age).

But, I did want to be a music agent and nothing was going to interfere with me getting one of the most sought after jobs in Los Angeles. Not the fact that I had zero connections in the business or the characteristic of the business being male dominated. 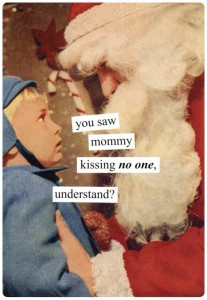 It was Christmas eve and I decided to attend a holiday ball with the sole purpose of finding a job. I made a bee line straight to a young man I hardly knew (but knew he worked at the largest talent agency in the world). I put on the charm and explained that my internship at MTV totally prepared me for a job in the music business and that I would be a perfect hire at his company. After throwing back a few egg nogs and impressing him with my extensive knowledge of rock n’ roll and pelethora of useless information in my brain, I convinced him to pass my resume to the Human Resources director at this agency. I was so excited that at least 10 shots of Jaegermeister somehow magically made its way down my throat and back up in less than an hour. But, I did not care, I had a way into the music business!

A few days after the ball, my phone rang and it was the human resources director who asked me to come in for an interview. I rushed around and needed to find a suit that did not look like a suit but was a bit like a suit. It needed to be professional but not that kind of professional. This is harder than it sounds. I could not walk in the door of the biggest music agency in a regular suit from Ann Klein nor could I enter the building wearing black plants aka -Hollywood clubbing gear. I needed stilletos but not black, something more tame. I wasn’t trying to sing my way in but wanted to impress them with my brain (but lets be honest  -blond girls are fun and it definitely didn’t hurt me in my quest to be hired in hollywood). The music business is an entirely different animal than any other industry. But, after searching the ends of the earth – I found the perfect outfit (tight but not busting out, just right) and I was ready to go get that job!

I got ready (4 hours) before the interview. Makeup was perfect (not like Tammy Faye but more nonchalant) and suit was good in all the right places (if I do say so myself). I drove down the street and entered the coveted agency building. This was where people became famous and I was invited in. Pulling in the parking lot, I was greeted by a security guard who could not crack a smile for less than $1000.00. He needed to search my car and make sure that I was not going to pull some drama from a scene with “Swimming With Sharks” (this was the company portrayed in that film and if you haven’t see it, go see it).  I circled down the parking lot, lower and lower and lower until I found a spot for my car. I got out and brushed my hair, powdered my nose, put on some lip gloss and once I finally found the elevator, entered the building (but not before going back to the car to check my teeth, nose, and makeup for one last time). After I calmed my nerves enough to hold my resume without dropping it out of my shaking hands, I walked into that building ready to go.

Following checking in at the front desk (and being stripped searched and fingerprinted) I entered a bank of double elevators which led me upstairs to my dream job. The elevator doors opened, I could have sworn that I heard the sweet sounds of a harp and it was as if I was walking into the gates of heaven. I walked toward the two receptionists sitting at their desks (which were so high I could only see their faces). Were they real people or just absolutely amazing looking robots with heads? I still don’t know but that does not matter. One of the heads asked my name and I told her I was there for an interview. She gave me a blank novel to fill out and told me to sit down on the longest reception couch ever. I could not help but wonder how many people’s dreams were made or broken while sitting on that couch. I began filling out my entire life on the forms and “Good Golly Miss Molly” my angel came out of the very same elevators I just exited. He had a helmet, hair sprayed nest just like a halo 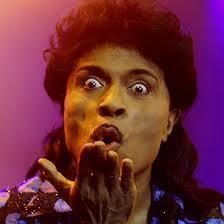 on the top of his head. His skin was as smooth as an angel but I didn’t even notice the pound of makeup creating this illusion because I was blinded by the light illuminating from his gold pants and red lame jacket. Maybe he really was an angel? He took a seat next to me and asked “Baby, why are you here?” Well, “Tutti Frutti” – it was Little Richard. Yes.

We sat and talked for some time, I did not even notice an hour had gone by and I still was not called in for my interview. During this time Little Richard and I spoke about everything (can not really tell you because I was a bit tripped out by the entire experience). All I really can remember was that I told him that he was my grandmother’s favorite entertainer and he gave me a signed glossy picture to give to her. I sat with him and as he was giving me some nuggets of advice I heard in the far distance, “Melany, they are ready to see you now”. I paused before getting up because I still did not know if I was in heaven and if this was real. But, it was real and I had just sat and talked with one of the most iconic men in Rock n’ Roll history while waiting for my shot at doing something great in the music business. As I walked in the doors to the next chapter of my life, Little Richard’s parting words to me were that I was going to get the job. And I did! (After only a 3-hour interview and agonizing questions from a nightmare of a hiring process…but that is a completely different story). “Girl Can’t Help It” because I just had to tell this funny true story first.

Melany’s Guydlines #27 –Never underestimate a man in pancake makeup, gold pants, and donning a hair helmet. He could be your Little Richard angel.