I was not impressed or excited to hear that Dave Grohl was talking and playing  SXSW in Austin, which is one of the biggest music festivals of the year. I just don’t get it. The rock n’ roll community needs to step up and embrace real musicians and good music. Just wander into any bar in Austin, and I guarantee you will find more talent than the Foo Fighters. I saw a girl weighing 95 lbs (soaking wet) rock a bar and schlep a bass around the perimeter for hours during her set. She sang too (and well). Or, what about the Blues band whose lead singer sweated like the hardest working woman in show business rock a bar the size of my living room? Those are real musicians and should be given the spotlight. Move over Dave, and let the real talent shine.

How is Dave Grohl a top ROCK musician? Should have been a one hit wonder! He named his band the “Foo Fighters” for f@#!@ sake! He couldn’t think of another name? 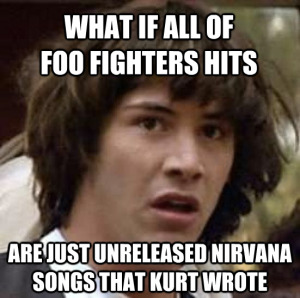 Foo Fighters is the worst band name ever – and they ride on Nirvana’s fame.

Come on. Their (so-called) music makes my ears bleed. Dave Grohl needs to stop riding on the coat tails of Nirvana from years ago. No one knew his name before Kurt Cobain passed away. It should still be that way. BTW….Grohl brothers, I have a great dentist. Get those choppers fixed ASAP! Email me for the number.