People ALWAYS ask me what I do. My answer is A LOT. But, my background and professional experience is in music.

I love music! Music is the soundtrack to my life (it is). I know that sounds cheesy but it is. I have a hard time relating to people if we have different taste in music. I am totally “audio-ly A.D.D.” meaning if the music is not good in a bar, club, at a party, in a supermarket, elevator- I have to leave. I find myself to be one of very few (people with good taste in music) blonde, Jewish rocker girls. We exist (trust me) but you just don’t see us (or never think we are Jewish in the first place, probably because of the blond hair).

Approaching the end of my college career, my mother asked me the dreaded question, “What are you going to do with your life?  You know you need to get a J-O-B,” and I replied, “I do?” I thought about what I was good at (and yes, I graduated Cum Laude – loud and proud Arizona Wildcat for life) and I knew that I could not get a job studying, shopping, partying or being a professional tanner so I decided to pursue a job in the illustrious music business.  This did not come as a surprise to any of my friends as I was always playing (dictator) the jukebox at my favorite watering hole (Dirtbags in Tucson, Az.).

I remember 2 (of the 8 lucky guys) that lived on my floor in college running down the hall to see what crazy, metal head lived on their floor. Imagine the look on their faces when they saw a little blond, Jewish girl rocking out while unpacking little (very little – it was the desert and hot) dresses to the sweet and mellow sounds of Metallica, Tool, and Soundgarden. In fact, music was in my blood! My cousin worked for a (great) band named, Motley Crue for 19 years and I grew up getting bags and bags of CDs (I am that old and was slightly offended when I saw CD’s being featured in an exhibit at a museum recently –I am not THAT old). So, it seemed fitting that my first internship was with MTV (yes, there used to be music on that TV station).

Approaching the summer before my last semester of college, I threw together a resume (of nothing because I had never worked a day in my life) and the next thing I know, I am speaking to the president of MTV on the phone and she asks me if I would be interested in working in the Press department? OF COURSE I WOULD!!! Within, the first week of the internship I am standing on the red carpet at the VMA’s and told to walk Gavin Rossdale (of Bush) down the Red Carpet (he knew how to walk but they wanted me to show him how to stop at all the media outlets). I freeze for a split second (maybe it is because I was wearing a cut off shirt and skirt which would have been inappropriate for any other work environment except for maybe a dance club) and step up to walk the next performer down the carpet. It is Dave Mathews. I stopped with him at all the interviewers and Xs marked on the carpet (he could have done it without me because I think he had done it once or twice before). That day was magical and I knew I wanted to be in the business. I always tell people, you either sink or swim in entertainment and it is up to you what you are going to do (so put on your big girl panties and suck it up).

MTV was the best internship ever (because you really can’t get fired as an intern, can you?) ““Jackass” had just been picked up on MTV and the guys had a photo shoot that I was required to attend, which became one of my favorite funny true stories. Picture a backyard with tall, brown grass (that had not been watered in 5 years). It was so hot that it was on fire (I could literally see flames coming off of it) as we stood outside. This did not stop a smart guy (Steve-O) from taking firecrackers and throwing them all over the yard (smart idea considering LA is on fire every year). The “Jackass” guys exited wardrobe wearing nothing but blue and yellow cheerleading outfits; short skirts (no underwear underneath) and even shorter tops exposing their physiques (fat or hair). Johnny Knoxville was given a tall; Marge Simpson, black bouffant wig but he wanted pigtails instead. He turned and asks me to braid the wig as he drinks his beer and I pray the house does not catch on fire from the firecrackers exploding all around me. They ask if I want a beer and I say (yes?) the appropriate answer because I am on the job (and 20 years old). 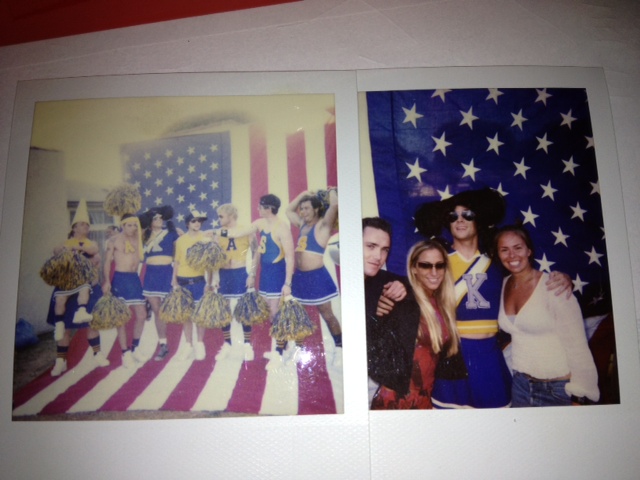 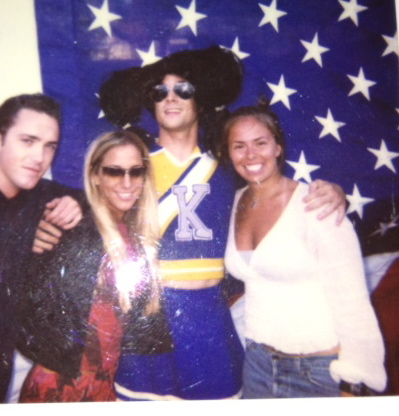 Yep! That is me

The fat guy (I think he was always known as the “fat guy” and never got his credit with an actual name) needed two cheerleading skirts attached to one another by (diaper size) safety pins to reach all the way around his enormous belly. Steve-O ran from firecracker to firecracker and then stapled a piece of yellow cloth to his chest (because that is what he did). I looked at the enormous tattoo of himself on his back and was then side tracked by a horizontally challenged person, dressed in the same cheerleading outfit (the skirt was a bit long on him) jump off a mini trampoline. Next, the portly fellow jumping off said trampoline only to lose his skirt somewhere around his “cankles”. As his skirts fell to the ground, I was blinded for a minute. Upon return of my eyesight, Steve-O stands on the American flag backdrop, pulls up his skirt, bends over, and takes his finger….

Melany’s Guydline # 16 – If you want to work with Jackasses, be prepared to see everything (and have a good ophthalmologist on hand). 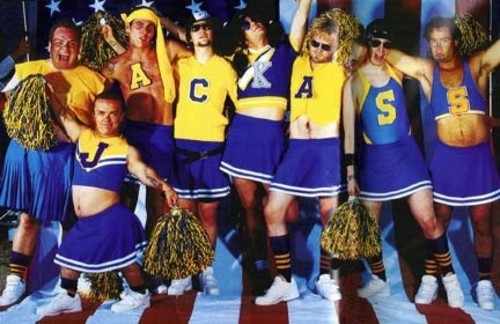 “Coprophagia” – Guydline from the working world
“And you may ask yourself – Well …How did I get here?”

4 Responses to First Jackasses in my life – Music lessons