So “hypothetically” speaking, I once knew this girl named Melanie. She was given the name “Felony Melanie” in college. Melanie had several nicknames throughout high school, including “Mel”, “Melba-toast” (lame), “Smelly Mel” (Thanks to her Uncle Ben – you’re an ass) and the one that stuck – “Felony Melanie”.

There’s a funny true story on how she earned this nickname (the hard way – not by doing time but by being the MOST determined under age drinker ever). The University of Arizona was a party school and upon entering the U of A, Melanie realized VERY quickly that she NEEDED a fake ID. So, she put her mother to work by constantly badgering her EVERY day and complaining that she could not do ANYTHING if she did not have one. Melanie did go to school in the desert and the people in Tucson were (at least) past living in teepees and quite advanced in several areas including staying out all night partying and drinking. Her mom suggested that she join a sorority (dumbest idea ever).

After joining a sorority, Melanie found herself being reprimanded (for not passing this cow/girl her food fast enough) while sitting at a table with 10 other girls (farm animals) in a large sorority house (that was actually used in the filming of “Revenge of the Nerds”). This cow (high priestess beast) DEMANDED Melanie pass food (slop) in a certain direction around the table (by seniority). Melanie looked at her (and laughed in her face) and then decided that she was NOT cut out for Sorority life. She never liked people telling her what to do (and still does not). Her short-lived career as a sorority girl only heightened Melanie’s NEED for a fake ID.

Following her disbarment from the sorority (herd of sheep), she received an envelope in the mail from a very lovely (annoyed) woman containing a fake id! This ID was huge (size of a greeting card) but had Melanie’s picture and said she was 21! Armed with her enormous form of identification, she and a few friends went to the ONLY place they could go to have a good time – THE BAR! Her first few friends that entered this establishment had REAL id’s (with pictures of girls that did not look like them AT ALL but had similar features and that was good enough). It worked for them. Melanie puffed out her chest and tried to enter the bar. The bouncer (guy from Long Island who’s calling in life was to be a bouncer at a college bar – probably still works there) looked at the greeting card sized, fake she presented him and laughed. He told her “Welcome to Arizona Freshman” and took her prize possession and put it in his pocket. As she was shunned away from her only chance of having a good time, Melanie decided this meant war!

Melanie enlisted help from a fellow student who had a connection. That is what she needed! Her family owned property in Nevada and when asked what state she wanted her ID from, she decided it was a good idea to use the Nevada address. The ID was great! Other people used this guy and had no problem with his ID. But, she needed to take it one step further (because she was never satisfied with good enough). So, Melanie decided to drive to a little retirement community in the middle of the desert (where people still lived in Teepees and Indians can be seen running around chasing javelina) and go to the DMV.  She marched her little ass into this tent and gave the old man behind the counter her real-looking, Nevada ID along with her REAL student ID card (DUMB idea) in exchange for an Arizona ID card. He asked Melanie to sit on a stump and wait for them to print up her REAL ID. She happily waited with baited breath for her ticket into the best party ever! About 10 minutes pass and they call her name. As she approaches the desk to grab the most important piece of paperwork to her college career, the man behind the counter informs Melanie that her ID was FAKE and that he was going to report her to the federal investigators. WHAT? OMG! What just happened? He wrote down a few numbers on a piece of paper and told her that was her case number and then informed her that she could be arrested. This man (acting like he had just caught a war criminal) advises her to call the number to ask what she needs to do next to find out about HER FEDERAL case.

Melanie takes her paperwork (now almost a real criminal) and walks back to the car where her friend was waiting to tell her that it was Ok to go in next. But, it was not OK. She just got caught! No one gets caught! SHIT! She calls her sister who tells her that she is an idiot because she went to the WRONG DMV and her mother who wants to disown her. A few weeks later, Melanie calls the number waiting for her (death) sentence and the person on the other end tells her that they have no record of the court case and she breathes a sigh of relief! Looks like they dismissed her case because of all the illegal immigrants coming into Arizona, they did not have time for a stupid college kid trying to get a fake ID. Thankfully she lived close to Mexico and Border Patrol was a serious thing. Hence, the nickname “Felony Melanie” was born. 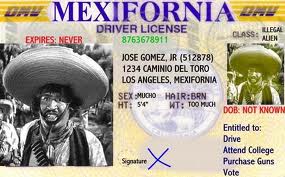 Let’s just say, the U of A got a lot better after that for Melanie.

Melany’s Guydline #11 – Be careful what you say when your name rhymes with the word “Felony”.