This funny dating story is entertaining to me because I just ran into ex-boyfriend #2 from last year after not seeing, hearing, or receiving smoke signals of his existence for almost a year! For ex-boyfriend #2 , we will call him John. I think that protects him enough. I mean come on John, and when I saw him he was running so fast that he was probably being chased by the police, another girl, huge man from the Castro named Fifi who wanted his money back or by someone else he sold his pretend life story too.  So, he is not innocent and there is no reason to protect him. Anyway, John lasted in my life as long as it would take me to write a “Dear John” letter. He was someone I did not know AT ALL but was convinced I was in love with. He entered my life with a bang and left with the same amount of drama. On one of our first dates, he asked if his dog could spend the night! OF COURSE! I am a total dog LOVER! His dog was adorable and was trying to be my ally when I let her stay at my apartment, which is fully adorned with white, fluffy flocati rugs. Poor pooch SHIT all over my carpet TWICE!!! I am not talking a little dog, but a large dog that could produce quite a stinky present and she did ALL OVER. She tried to send me a “signal” but I did not speak “SHIT” as well as John. I should have known! Even the poor guys who came to clean the carpet (and they were emergency carpet cleaners who see a lot of SHIT) made stank faces as they entered my apartment that smelled worse than a bathroom in a public park. This should have been the first sign, right? Well, apparently I was in the mood for some more crap because I let him into my life and let him crap all over me.

John APPEARED to be almost perfect! He was an internet guru (15 years ago) and showed me a good time (the first week). I bought his sales pitch (hook, line and sinker and boy did our relationship sink). He took me out in his fancy car, said all the right things, and told me stories about his glamorous life because he was a few (looked 20 years older) years older than me. I still don’t know how old he was but judging by my most recent encounter (he was walking with a walker), he lied about his age too!! My friends loved him because he looked them in the eye while speaking and said all the right things (he was an A-list actor and deserved an Oscar or 2 for his performances). He always wanted to be at my place for breakfast, lunch, dinner, dessert, and every waking hour of every minute while his apartment was down the street. Weird? Yes! No – I thought he just really LOVED me after a week.  He was so comfortable literally moving in with me. But, what about his J-O-B (which he complained about but I never saw him working) or the fact that we NEVER went to his house and left the poor dog (my SHITTING ally) in his apartment. That SHITTING dog was the smartest one in our relationship!! 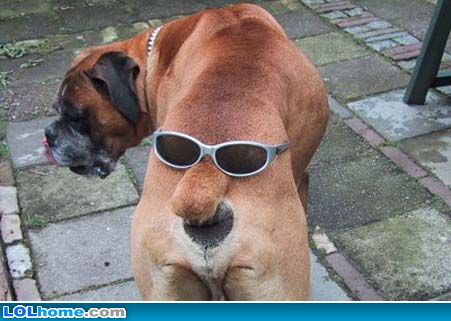 One night we went out to dinner and I had a few glasses of champagne. On receipt of the bill, John says to me that my champagne was expensive. WTF?  Wasn’t he some hot-shot internet guru who took limousines to work everyday? (or so he told me – which is so lame btw).  Then he proceeded to awkwardly hit on the waitress (offering her a shot of tequila and just ignoring his little ole’ girlfriend sitting next to him). SIGNAL – Melany!!! John was like Bernie Madoff (kinda looked that old too) – or so he thought (until he met me). I had closed my eyes and enjoyed the crap he fed to me. Until one day, I asked some very basic questions about his J-O-B and was very interested in why we were not going out anymore and questioned that I was now paying the check when we did go out. His head spun around like Linda Blair from the “Exorcist” and he had a total mental breakdown (I think I even saw him drooling from the mouth a little). I need to put a therapist on retainer with all of these crazy people in my life. He started crying and telling me his sob story (there was nothing sad about it except for the fact that he believed his own lies). After leaving that night, I NEVER heard from him again. Until one day…….(to be continued with more SHIT)…

Y ???
Dear John – The relationship “letter” for my ex-boyfriend