So, now that I have lost yet another Facebook Friend, (I am sure it is one of the John’s on my friend list or probably his sister) I am going to share another funny dating story that will not insult anyone (hopefully). I know that I had one police officer as a friend (but I think he is in jail) and does not count anymore (right?). Of course, I dated this guy for a split second until I noticed that he constantly referred to himself in the third person. He was a struggling actor (waiter) in LA and had “the look” (or so I thought upon our first meeting – I was drunk).

We met at a club in Hollywood through a mutual friend and he was larger than life. Let’s call him “Heaven” because he thought that he was so fantastic and spending time with him was “Heaven” (this is so close to his real name, honestly). When I first moved to Los Angeles, everything was new and exciting and I just went with it. His body was indeed from “Heaven” and he was drinking something with this special additive beginning with an “F”. Now, I still have NO IDEA what this is or was but knew that he was AMAZING looking and he assured me that it was LEGAL and if I drank his potion it would feel amazing and “cut” my body just like his! So, I did not speak up when he dipped his dropper in my drink (many times). I was dancing in “Heaven” and next thing you know I am being assisted out of the club by my two friends because I can’t walk. We were in his car and I was trying to give him directions to my house but my brain and mouth just would not communicate. They were out at different parties and the only words I could utter were, “Go straight, go straight” and that was great because we were in Hollywood and I knew I needed to get to Beverly Hills! (I was taught that the W in West stands for water and we were indeed going West towards the water). Once, home (West) he came in with me to “hang out”. We were talking and the next thing I know, this magic potion is flying out of my mouth (along with my dinner from the last two nights) into my beautiful porcelain toilet! Wow- wasn’t I sexy after appearing from my little conversation with that toilet? Well, apparently “Heaven” thought I was from “Heaven” and tried to kiss me! SICK!!!! He was not disgusted at all by my little party in the bathroom and he and “F” stayed in my life for a while after that.

So, of course I loved this “F” stuff because it did “cut my body” (because you could not keep food down after drinking it) and kinda felt nice after that. I decided to share my secret with some friends on a trip to San Diego. A few of us were drinking at a club while watching my favorite DJ spin. I decided to drop this legal “F” into my friend’s drink (MANY times). Fast forward a few hours later, that friend is dancing from the rafters, sweating through his now iridescent white T-shirt, and running around like his pants were on fire (they could have been, for all I know). The end of the night comes and we can NOT find “Pants on Fire” because he was nowhere. OMG! I killed him. After calling his phone for the next 48 hours he finally picks up and I ask where he has been. He told me that he has no idea but woke up on the streets of San Diego next to a prostitute. When I did go to pick him up, he was on a corner in downtown San Diego with a woman (man?) who told me that “Pants on Fire” was very nice and that they had a good time. What in the world did I give this guy? OMG! Soon, I find out that this “F” stuff should be measured by the person’s weight and I POURED it in my “Pants on Fire” friend’s drink. We did not drink the magic, body-cutting, feel good potion ever again and that friend still has no recollection of those 48 hours except for the crumpled note he found in his pocket, with the she-mans phone number written in red lipstick.

Soon after our crazy night in San Diego, I found out that “Heaven” was indeed a former police officer (not sure if he was actually a stripper from the local stripper gram place). He was doing more than selling “F” to people and no longer had his badge or gun (thank God). I am picky but have the worst taste in men (obviously). My favorite part of this guy was his affinity to enter a room and shout, “Heaven is here!” at the top of his lungs. WINNER!!! Another point for me – NO! 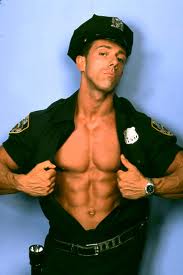 “Heaven” may be partners with the idiotic police officer who pulled me over on Friday (shout out to Officer I-have-nothing-better-to-do) for illegal tinting on my front door windows.  I was driving in Culver City and get stopped by this officer out of nowhere (literally wrote that I was driving 25 in a 35). When his red lights flash behind me, I think he is just going to pull me over because he likes my car (that HAS happened to me in Tucson, Arizona when I got my first BMW M3 convertible). But, this cop meant business and did not want to compliment my amazing taste in automobiles. He walks up to my car like I had been dealing “F” to all the kids in the neighborhood and says, “do you know why I stopped you? You have (get ready for it) illegal tinting on your front windows”. What? I told him that, “I got this tint from Audi and they would not do that”. He explained to me that it would be OK if I had a 4-door but because I was in a 2-door convertible it was not ok! What? I wanted to tell him that he must be taking too much “F”. He proceeds to tell me that he is going to write me the ticket. Was “Heaven” his partner and they are just messing around? No! He gives me the ticket! I like “Heaven” much better and want him back as my local police officer. Maybe I should have been dealing “F” and then at least he would have had a real reason to pull me over!

Anyway – Shout out to “Heaven” in cell block 6 and tell your idiotic partner to chill out and get back to work stripping in Hollywood for bachelorette parties because he is taking his job WAY too seriously and must have gotten into the “F” again!

One Response to Dating – The laws for a guide to a perfect relationship!