It is pre-Oscar week and in Hollywood that means there is a lot going on. A lot meaning way more than what is going on in my love life, which is nothing unless you count that atrocious date, I went on last week. I have totally exhausted all of my patience with the men via online dating sites and have left the pleasure of interacting with these gems to my mother who doesn’t mind talking to unsuspecting guys in hopes of finding a diamond in the rough. Well, she has not done badly until last week. But, in all honesty it was not her fault but his!

I am uncertain why people feel the need to create an online dating profile that does not properly represent who they are because chances are the two people interacting will one day meet in person, right? Well, you would think but as I have attested to in the past there are a lot of guys out there that like to chat with women and get phone numbers just to collect in jars. My number is sitting in several of those jars. Break glass in case of an emergency or something?

If you don’t know about Tinder I will give you the run down. It is an app that syncs with Facebook. It is easy which is great because I have a history of dating the dullest tools in the shed. You know, dumb as a bag of hammers? But, at least with Tinder it is quick and I don’t have to read some pre-written bullshit essay the guy posted on every other dating site in hopes of finding an unseasoned dater.  For Tinder matches, both people need to rate “hot” or “not” (or the middle part with no button means if I have time, drunk or am bored and you are average looking then I will meet you for a drink). If it is a match then you can text via the Tinder app. But, be careful as to whom you give your cell phone because Tinder animals don’t go away. There is one guy that will not stop texting me. He just won’t. It is like he has no other number in his phone and the app has turned him away from his relentless poking or lack thereof.

I do have to hand it to people on Tinder because they don’t apologize for selfies or ridiculous mugshots posted as their pictures. You know exactly who you are dealing with and there is no question to the level of douche baggery. I knew what I was getting into pressing the “hot” button for a shirtless guy, on his muscle car, with ducklips. I get what I asked for with this guy. The guys I will never understand are the specimens who post pictures that look nothing like what they do in person. This is what happened with the guy I met last week. Let’s just say his pic was pre or post nose job. Not sure which one because I do live in Beverly Hills and right down the street from the plastic surgeons that treat (or deform) Hollywood royalty.

Yes, Mr. Piggy – you looked nothing like your picture! WTF? I showed up at the bar and wanted to run the other way but stuck it out like a champ and stayed for my obligatory one drink. Weirdest part was he rushed me through the drink and pleasant conversation and didn’t even wait for me to finish that one drink. So, not only did he look like a farm animal but he acted like one too! I mean I was polite and did not run away squealing.

So, thankfully this we 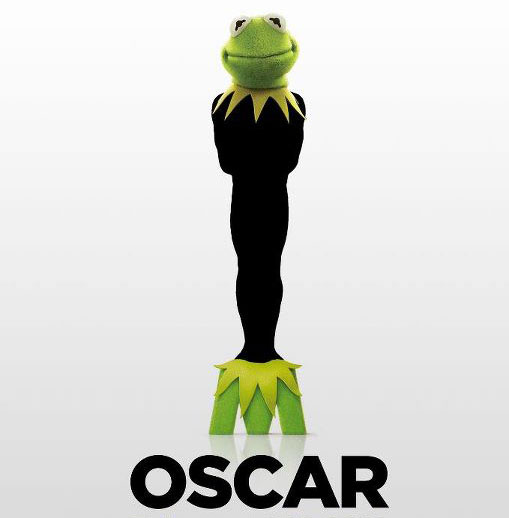 ek we have Oscar parties at my office and there are some really great speakers coming through our doors! Maybe my diamond, ruby, or at least Kermit will walk through the doors? Cheers to hoping!