I try not to blog about dating all the time, but there are so many ridiculously crazy men in this world (it is hard not to tie it back in and tell my crazy dating stories).

So, another relationship bites the dust. I don’t know what happened.  The excessive calling, texting, and emails sent and suddenly, nothing. Not even a peep! What this time?

Maybe it was your inadequacies as a man and your lack of ability to get the job done. We started off so strong, frequent calls, supportive emails, and texts throughout the day. Our relationship was strengthened by your understanding of the morons that flood my life (like flies to shit). I was so appreciative of everything you did and you never missed a beat. You read my blog and supported each and every post, offering good advice (was not that good, but I pretended it was). We had mutual friends and shared our love for music (rock, of course). We had been together once before and it worked out great, but distance kept us apart. What happened this time?

I did not think you were like the others. You were not like the guy (called hungry) who would call and text me (EVERYDAY) to see how my day was going but the only time we would “hang out” was when he came over, so that I could watch him eat. Or, the guy that gave me a huge “bums rush” and told me that we would travel the world together and go to extravagant places and then I found out he could not go anywhere (except by taxi) because of his unresolved DUI (and pending court date). “Stan the Sham” was wonderful; we came from the same place and had so much in common (or so he told me, but I have two pennies to rub together and CAN rent a car). Or the guy on the internet who explained he was having a hard time concentrating on our IM’s because he was watching video to prepare for a party “he was hired for” (but was not a stripper). What about the guy who was going to a wedding in Malibu and asked if I like pictures? Of course, I love pictures (only have 999 on Facebook) and then sent me a peculiar picture with his arms, legs and head cut off (wearing weird white shorts with a suspicious fruit tucked inside). You were not like the guy who could not remember my phone number, only to call me 5 hours after we planned to go for drinks to tell me that he was in the neighborhood and wanted to see me (yeah, right- I am washing my hair). Or the drunk Producer who handed out his card (like it was candy to children) and told EVERYONE that he was a Producer and doing well (when he really lived in a studio apartment somewhere in the black heart of Hollywood – I don’t mean the good part ). Oh I know, it was the OTHER Producer who drove a 2 million dollar car (and was sure to tell me about it and the other 35 cars and 1 jet he owned). 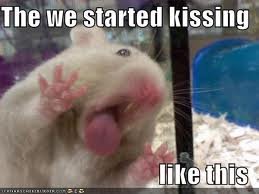 Want to see my cars?

Don’t worry, he was way to aggressive (and tried to fish something out of my throat with his tongue). And, I looked up the car value which was (only) $500,000.00. I don’t date those guys.

I know I have been working a lot lately and neglecting our time together but the movie was a big responsibility and the aftermath has been even bigger. Are you mad about Teddy Brewski? He is an innocent puppy and has been giving me a lot more attention than you. Teddy is a baby and needs all of my attention.

Maybe you spoke to the “other” me online.  I know there were pictures of me, but it was not I. FitfoodieLA girl stole my pictures (not 1, but 5) and was anti-animals (telling people that she wanted only human relations). Would I ever say that? You should know me better than that considering I did an ENTIRE photo shoot with my dog. (Don’t worry, I reported her, but someone beat me to it).

Well, I have moved on to a younger, creative, more hip guy and he will be helping with the (the backend) of my blog from now on. Good luck on your business and life and thank you for being a part of my blog (written in good company in this post).

Melany’s Guydline #15 – If a man can’t admit that he does not know how to do something correctly and just runs away, let him go! He will never commit Coprophagia (puppies are much better than men)!

“Big hat, no cattle” – Tips and Guydlines for movie filming in your home
First Jackasses in my life – Music lessons